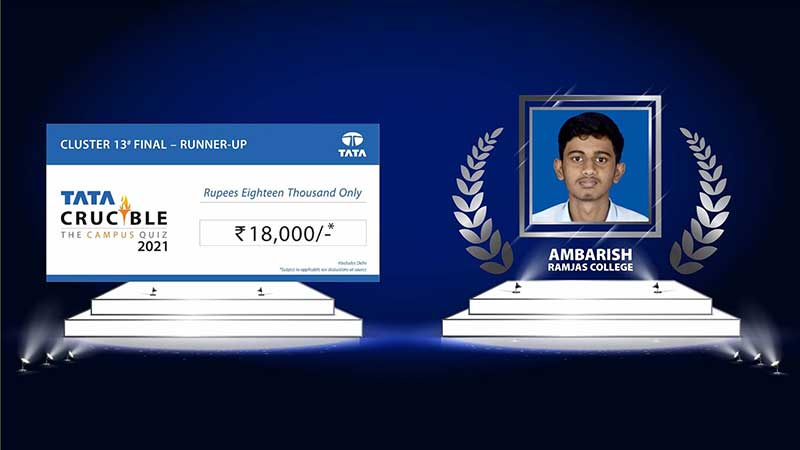 The Delhi edition of a Tata Crucible is one of the nation’s most keen contested battles. That seems true both on the ground event and the digital version too. The line up consisted of some of the best minds from the nation’s capital as Ms. Rashmi Furtado went about quizzing them through the wild cards, to identify the top six from the cluster.

The final was a really tight battle. Quizmaster Pickbrain had certainly prepared questions specific to this cluster with many from the same region. The battle was too close for comfort as Vishnu and Teestaa were doing well, but were not able to pull together a string of answers to surge ahead. That left the battlefield open between Nakul, Ambrish and Ankit. They were all on par, with Ambrish doing particularly well towards the end, while Ankit held on to early leads and played very well to win his first Tata Crucible title. In a tie breaker that followed for the runner up spot, Nakul was out-buzzed by Ambrish who clinched the poser and finished second.

The chief guest Mr. Tanmoy Chakrabarty – Group Government Affairs Officer at Tata Sons, spoke of the importance of adapting to change and the way a Tata Crucible had done that during the pandemic and beyond. He also advised the youngsters to stay focussed as they march into their corporate careers.