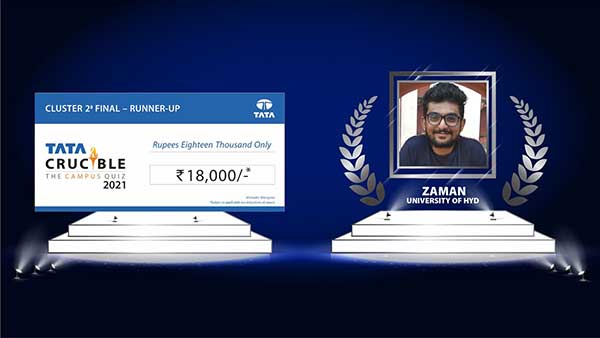 The city of Hyderabad which largely contributes to the participation in the Telangana region of Tata Crucible is known to be a city with high quality quizzers who are both passionate and talented. The contestants lived up to this reputation as this year’s line up presented some outstanding quizzers. The wildcard rounds conducted by quiz host Ms. Rashmi Furtado witnessed nervous battles before the following six made it to the cluster final.

The finale for the cluster was hosted by quizmaster Pickbrain. As the quiz started to unfold it quickly became a battle between Vishnu, Zaman and Dr.Murtaza. While Vishnu tried his best to stay in the battle, it was Zaman and Dr.Murtaza who progressed into the final rounds with almost the same scores. It was however in the final moments of the quiz when a tie breaker between these two had to be resolved for the winner to emerge.

It was eventually the doctor who prevailed over the rest to win the title Zaman finished accredible runner up. The chief guest Professor Aseem Prakash of TISS Hyderabad advised the students to always be compassionate and care for the other as they have demonstrated in the quiz by being very courteous opponent’s. He underlined how the world would be a better place if each one cared for one other person.